When it comes to seeding your yard, one of the most commonly asked questions is ‘Which lawn spreader is best for my job?’  Whether it be a broadcast spreader, drop spreader, or a handheld spreader, the right spreader will prevent you from wasting materials while also improving results.  Here are some factors that you should consider: 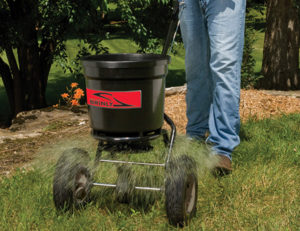 Broadcast spreaders “broadcast” fertilizer in a fan-like pattern.  Most broadcast spreaders have a dial which allows the material to be dispensed at various rates.  However, the spread width depends on the rate that you are walking.  Broadcast spreaders are built to handle many different types of products, such as seed, fertilizer, sand, and ice melt.  One downfall to broadcast spreaders is that it is hard to control where the material lands, making it difficult to avoid walkways, driveways, and gardens. They can come in a Push or Pull design, with a push spreader being a manual job while a pull-behind spreader can be towed by a tractor or ATV.

Drop spreaders have precise accuracy as they drop material straight down.  Similar to the push-behind broadcast spreader, the rate at which you walk impacts the spread width.  Due to material only dropping between the tires, you must be sure to overlap wheel paths on each pass.

Handheld spreaders are most commonly used for smaller lawns or small areas, as they are the most portable and the easiest to use out of all spreaders.  Like the broadcast spreader, handheld spreaders also fan material but over a much smaller area.  They typically have a dial that controls the flow of material and are operated with a hand crank.

In conclusion, getting the right tools for the job is the most important step in getting the healthy, green lawn you want this year!

Brinly U is your go-to place for the most in-depth information on how to maintain a beautiful, healthy lawn and garden.